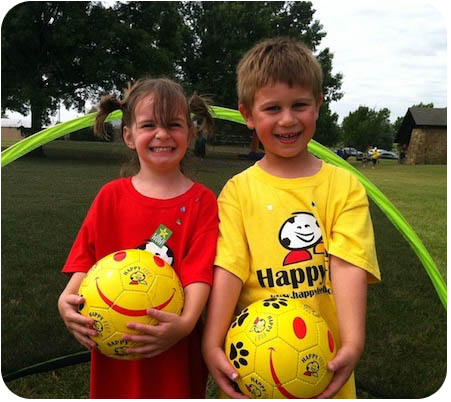 We use familiar songs, stories, nursery rhymes and fun games to introduce soccer to children as young as two years old. Our unique curriculum triggers your child's imagination by taking their soccer ball, Bob the Bobcat, on adventures to the zoo, the movies, and even an enchanted castle! Our philosophy and curriculum encourages children to tame their bobcat with their learned deceptive dribbling and ball striking skills. We leverage creative play and the important developmental skills it provides to make fitness and soccer their favorite weekly activity!

The original HappyFeet program started in 1988 when Kansas City's La Petite preschools ran field trips to Andy Barney's indoor soccer facility. Andy thought teaching soccer to 3,4 & 5 year olds would be easy. After 6 stressful back-to-back, one-hour lessons, Andy quickly realized that an educational curriculum sensitive to the needs of young children needed to be developed. It was then that stories such as "Hiawatha, the Dribbling Indian" and "Gus, the Banana Gobbling Gorilla" were created. Later nursery rhymes and songs such as "Roll, roll, roll the ball" to the tune of "Row, row, row your boat" were added.

In the summer of 2006, Scott Gaither was watching his daughter participate in a dance class at her preschool. He compared it to the Legends "Mini- Kickers" program and saw that soccer the HappyFeet way was more developmental and enjoyable. In that instant, Scott knew that an "on-site" preschool/daycare story, song and nursery rhyme soccer program would be a bigger hit with the schools, kids and parents than the dance class his daughter loved so much.

In October 2006, Andy and Scott formed HappyFeet to offer year-round classes on site at preschools. HappyFeet also runs successful camps and year-round HappyFeet leagues. HappyFeet in conjunction with the Legends Soccer Club & Soccer Excellence is is adding new franchises at the rate of one per month, nationally and internationally.